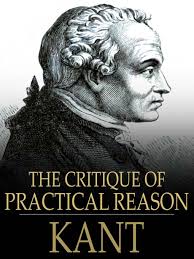 The will, Kant says, is the faculty of acting according to a conception of law. When we act, whether or not we achieve what we intend with our actions is often beyond our control, so the morality of our actions does not depend upon their outcome. What we can control, however, is the will behind the action. That is, we can will to act according to one law rather than another. The morality of an action, therefore, must be assessed in terms of the motivation behind it. If two people, Smith and Jones, perform the same act, from the same conception of the law, but events beyond Smith’s control prevent her from achieving her goal, Smith is not less praiseworthy for not succeeding. We must consider them on equal moral ground in terms of the will behind their actions.

The only thing that is good without qualification is the good will, Kant says. All other candidates for an intrinsic good have problems, Kant argues. Courage, health, and wealth can all be used for ill purposes, Kant argues, and therefore cannot be intrinsically good. Happiness is not intrinsically good because even being worthy of happiness, Kant says, requires that one possess a good will. The good will is the only unconditional good despite all encroachments. Misfortune may render someone incapable of achieving her goals, for instance, but the goodness of her will remains.

Goodness cannot arise from acting on impulse or natural inclination, even if impulse coincides with duty. It can only arise from conceiving of one’s actions in a certain way. A shopkeeper, Kant says, might do what is in accord with duty and not overcharge a child. Kant argues, “it is not sufficient to do that which should be morally good that it conform to the law; it must be done for the sake of the law.” (Foundations of the Metaphysics of Morals, Akademie pagination 390) There is a clear moral difference between the shopkeeper that does it for his own advantage to keep from offending other customers and the shopkeeper who does it from duty and the principle of honesty.(Ibid., 398) Likewise, in another of Kant’s carefully studied examples, the kind act of the person who overcomes a natural lack of sympathy for other people out of respect for duty has moral worth, whereas the same kind act of the person who naturally takes pleasure in spreading joy does not. A person’s moral worth cannot be dependent upon what nature endowed them with accidentally. The selfishly motivated shopkeeper and the naturally kind person both act on equally subjective and accidental grounds. What matters to morality is that the actor think about their actions in the right manner.

We might be tempted to think that the motivation that makes an action good is having a positive goal–to make people happy, or to provide some benefit. But that is not the right sort of motive, Kant says. No outcome, should we achieve it, can be unconditionally good. Fortune can be misused, what we thought would induce benefit might actually bring harm, and happiness might be undeserved. Hoping to achieve some particular end, no matter how beneficial it may seem, is not purely and unconditionally good. It is not the effect or even the intended effect that bestows moral character on an action. All intended effects “could be brought about through other causes and would not require the will of a rational being, while the highest and unconditional good can be found only in such a will.” (Ibid., 401) It is the possession of a rationally guided will that adds a moral dimension to one’s acts. So it is the recognition and appreciation of duty itself that must drive our actions.